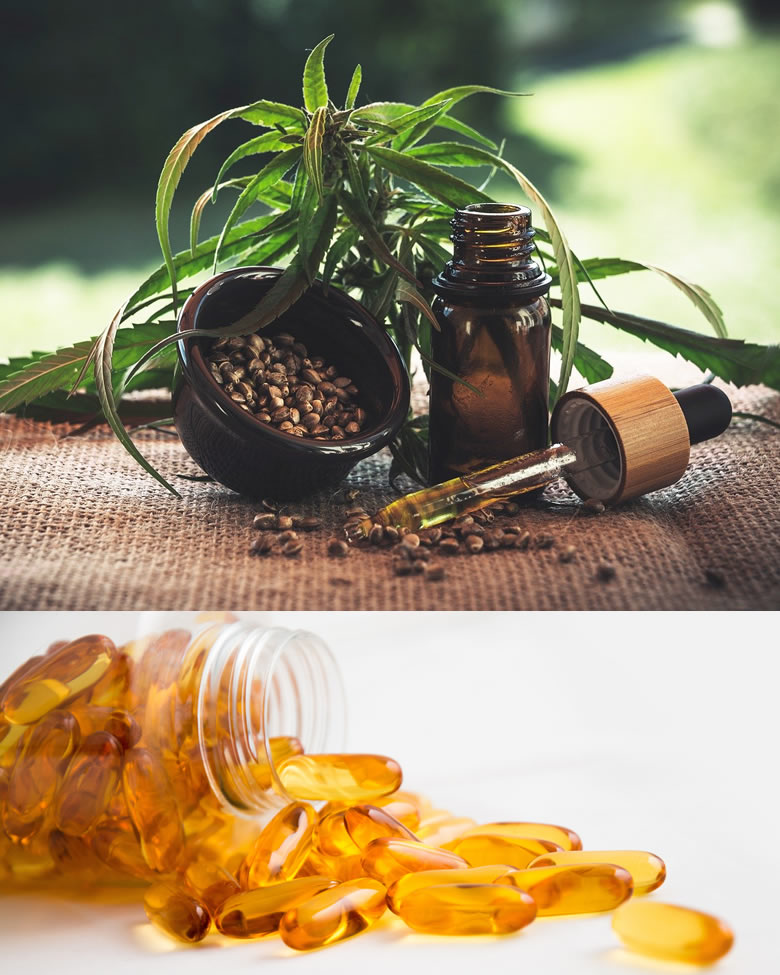 Cannabidiol is a popular natural remedy used for many common ailments. Better known as CBD, it is one of the 104 chemical compounds known as cannabinoids found in the cannabis or marijuana plant, Cannabis sativa.

Tetrahydrocannabinol (THC) is the main psychoactive cannabinoid found in cannabis and causes the sensation of getting “high” that’s often associated with marijuana. However, unlike THC, CBD is not psychoactive. This quality makes CBD an appealing option for those who are looking for relief from pain and other symptoms without the mind-altering effects of marijuana or certain pharmaceutical drugs.

CBD oil is made by extracting CBD from the cannabis plant, then diluting it with a carrier oil like coconut or hemp seed oil. It’s gaining momentum in the health and wellness world, with some scientific studies confirming it may help treat a variety of ailments like chronic pain and anxiety.

1ARE HEMP AND MARIJUANA THE SAME?
No. Hemp is completely different from marijuana in its function, cultivation and application. Marijuana, as it is widely known, is used for medicinal or recreational purposes. Hemp is used in a variety of other applications that marijuana couldn’t possibly be used in. These include healthy dietary supplements, skin products, clothing and accessories. Marijuana contains many chemical compounds that create the different characteristics of the plant. Terpenes provide flavors and aromas, while chlorophyll in the leaves makes the plant green – but the most important chemicals in marijuana are the cannabinoids.
2ARE YOUR PRODUCTS LEGAL?
On December 20, 2018 President Donald J. Trump signed into law the 2018 Agricultural Improvement Act, otherwise known as the 2018 farm bill. This act contained language specifically inserted by Senate Majority Leader Mitch McConnell (KY) that completely legalized industrial hemp and ended nearly 80 years of prohibition on the plant. Hemp is now completely exempt from the definition of the controlled substance act (CSA). Furthermore, the 2018 farm bill clarified the definition of hemp — often limited to fiber and seed — to include the entire plant, specifically the floral parts and cannabinoids derived from it. This put into motion the legal framework for the already burgeoning marketplace for hemp and CBD extracts. The 2018 farm bill also opened up the ability for tribal lands to grow hemp and made provisions for USDA crop insurance and grants.
3WHAT ARE CANNABINOIDS?
Cannabinoids are the chemicals that give the cannabis plant its medical and recreational properties. Among the 113 cannabinoids produced, THC and CBD are the most prevalent and the most well-understood. Most strains of marijuana sold today are cultivated with higher levels of THC. THC is known for its psychoactive properties and is the reason you feel “high” after ingesting marijuana. Whether produced by the body or in a plant, these naturally-occurring compounds all interact with the endocannabinoid system.
4WHAT IS THE ENDOCANNABINOID SYSTEM?
The endocannabinoid system refers to a collection of cell receptors and corresponding molecules. You can think of cell receptors like little locks on the surface of your cells. The keys to these locks are called endocannabinoids. Each time an endocannabinoid binds to a cell it relays a message, giving your cell-specific direction. There are two different types of cannabinoid receptors: CB1 and CB2. CB1 receptors are found primarily in the brain and responsible for the psychoactive effects of marijuana. Each time an endocannabinoid binds to a cell, it relays a message, giving your cell specific direction. WILL I GET HIGH FROM HEMP? No. While there are at least 113 known cannabinoids produced by the hemp plant, cannabis is identified by its two active ingredients: THC and CBD. THC is the only molecule in the cannabis family with a psychoactive component. It’s the only one that will get you “high.” CBD, even at extremely high doses, will not make you feel “high.” There are hundreds of other cannabinoids, terpenes and phytonutrients present in the cannabis plant that are beneficial to overall health and wellness; unfortunately, they are improperly associated with the properties of one molecule, THC.
5WILL CBD OIL SHOW UP IN A DRUG TEST?
There’s a lot of factors at play here and the simple answer is kind of complicated. It’s a solid- yes, no, maybe situation and for a variety of reasons; from compound to the individual to dosage, to the test itself.
6DIFFERENT CANNABINOIDS AND DRUG TESTING
First, isolated CBD, also known as Cannabidiol, generally will not show up in a drug test. That’s mainly because drug tests are not looking for all cannabinoids, they’re looking for one specific cannabinoid. However, a full spectrum product will contain array of other cannabinoids (such as CBG, CBN, CBC, THCV, etc) which may show positive on a drug test. Currently we don’t know what other cannabinoids may trigger a drug test.
7WILL YOU FAIL A DRUG TEST IF YOU TAKE CBD OIL?
Possibly. Here’s the complicated part. There are a lot of variables at work here, from the drug test itself (different manufacturers, different detection levels, sensitivities, etc.), and the individual that consumes the CBD product. Here are some additional factors to consider: Is your product a full spectrum product? Meaning, are there cannabinoids other than CBD? How much is consumed and how often? Medical factors, such as medications taken, liver and/or kidney disease; see our article regarding side effects of CBD here. The metabolism of the individual.
8CAN I FAIL A DRUG TEST USING HEMP-DERIVED CBD OIL?
The short answer is yes, it’s possible to fail a drug test with any CBD product. (Yes, even isolate CBD.) But there’s more to the story here. Read on to find out how to navigate the murky waters of drug testing if you use CBD products.
9HOW MUCH DO YOU HAVE TO TAKE FOR CBD OIL TO SHOW UP ON A DRUG TEST?
Again, everyone’s metabolism is different and medicines, liver, and kidney function all play roles in a positive or negative result. What kind of drug test is being administered is another factor. And dosage is yet another component in this risk assessment.
BUY NOW
Call Now Button